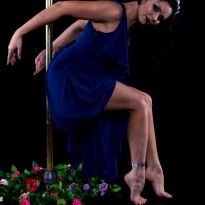 Kiah has been a dancer and performer all her life. Beginning with her first ballet, jazz and tap classes at the age of 3, her formal dance training continued until she was 16. When she was 5 she began figure skating, which quickly progressed into competitive ice dance. She competed for several years as an ice dancer, placing third at the Australian Championships at 8 years old. Much of her discipline and poise stems from her skating background.

She joined Studio Verve in 2013 after a year of deliberating and hasn’t looked back since. Kiah loves the creativity, freedom and increased strength that pole develops, and being able to combine her love for contemporary and lyrical dance is an added bonus. As such, she has been a proud member of the Studio Verve Lyrical Pole course for the past 12 months.

Kiah is one of the newest Pole Fit instructors at Studio Verve and has performed in the past three Open Nights in both solo and group routines. She is ecstatic to finally bring her pole performance to the big stage for Polarity.