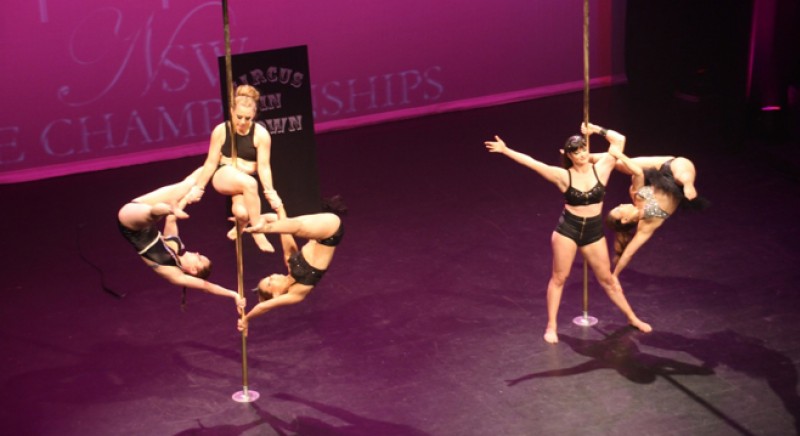 Backstage at the NSW Pole Championships

Competing in any event, no matter the sport or how prepared you are, is always a daunting thing! I was lucky enough to be performing alongside my Fusion Five girls, as well as share the stage with Jennifer Grace and D’Archangel, so our backstage experience was a nervous Studio Verve party (minus the champagne, chocolates, lollies… ok so it was nothing like a party, but we were nervous!)

While I don’t want to skim over the months (and months!) of hard training that went into organising our routines, I really want to focus on our backstage experience. And what an experience it was…

Clare attacks Jen with an exploding can of glitter hairspray

As most of you know, Verve is a family through and through. None of that fake stuff, we truly care about one another and will support each other to the end! This has never been clearer than behind the scenes on Saturday. Examples you ask?

Ok. Right before my solo, my entire Verve family made their way to the prep room to see me off. They were all amidst a flurry of hair and make-up and their own preparations, but made sure to come and hug me before I went out onto that big scary stage. They were there with me. But absolutely nothing compares to coming OFF stage and being in a crash-tackle style hug.

More? Right-o: our group routine. Yes, as many of you know Fusion Five was disqualified, it’s a rather long story. There were tears, months of training down the hole. Despite our devastation and breaking hearts, we resolved to still perform our routine the way we had rehearsed; the way we knew people would want to see it. Getting up in-front of 500 people and smiling through a super energetic routine when you’ve just been told you don’t even have a chance in the competition is no simple feat, it took guts. After a little pep talk from our fearless leader Jen and a little Verve huddle, we hit the stage and we hit it HARD! The girls took all their emotions, turned them into positive energy and absolutely smashed this routine. I could not be prouder or more in awe of these ladies I gladly call my family. Still on a high, we all ran back to the dressing rooms to watch the mesmerizing duo D-Archangel (aka Michael and Kayla). So much sexiness in one routine, whoa! It became clear to me just how close our team really was at this point. We were in a room full of people, some knew each other, some from the same studios (others obviously complete strangers so they can be forgiven) but NO ONE was talking to each other. No cheers of excitement for their fellow pole-rs, not even a murmur of praise. It was like being in a library. Eerie. Again, more hugs all round.

And lastly, never have you seen so many people huddled around a TV than when the glue of the studio was on stage. I think we were more nervous backstage than Jen was! Fairly confident not one of us blinked until she was finished.

We’ve always been a tight group, but sharing this experience has brought us closer than ever before. I count my lucky stars that Studio Verve was the studio I decided to begin my pole adventure. You guys all rock!