In it's second year, we recently we hosted our annual in-house PoleFit Championships. Seven competitors took to the stage to battle it out in a night filled with pole, dance and inspirational performances.  After claiming the title of 2018 PoleFit Champion in the Advanced division, we caught up with Tyson to find out a bit more about his pre-comp prep, why he loves pole dance so much and and get some inspirational advice he has for anyone thinking about competing.

What made you start pole dance classes?

When I lived in Wagga, my sister's friend from high school opened up a pole studio. I was intrigued and I'd previously seen a couple of performances on the internet. Hockey season was wrapping up and I thought it would also be a great way to get fit. Now I can't get enough!

What do you love about pole dancing the most?

I love the culture. No matter what city I'm in, polers are always welcoming of others. It's always such a positive environment, full of encouragement, kindness, and humour. I think this is one of the sport's biggest strengths and one of the main reasons as to why it's continuing to rapidly gain popularity around the globe.

Practice, practice, practice! (surprise!). I came into the studio roughly 5 days a week (before it was usually 2 days a week) for classes and practice for a month and a half leading up to the comp, just so I could increase my stamina and work on the combos for the routine.

What inspired you to compete in the PoleFit Championships?

It had been a year and a half since my last performance, and I was keen to get back out on stage and strut my stuff. I was nervous about performing, however I knew that the only way to deal with these nerves was to just do it! 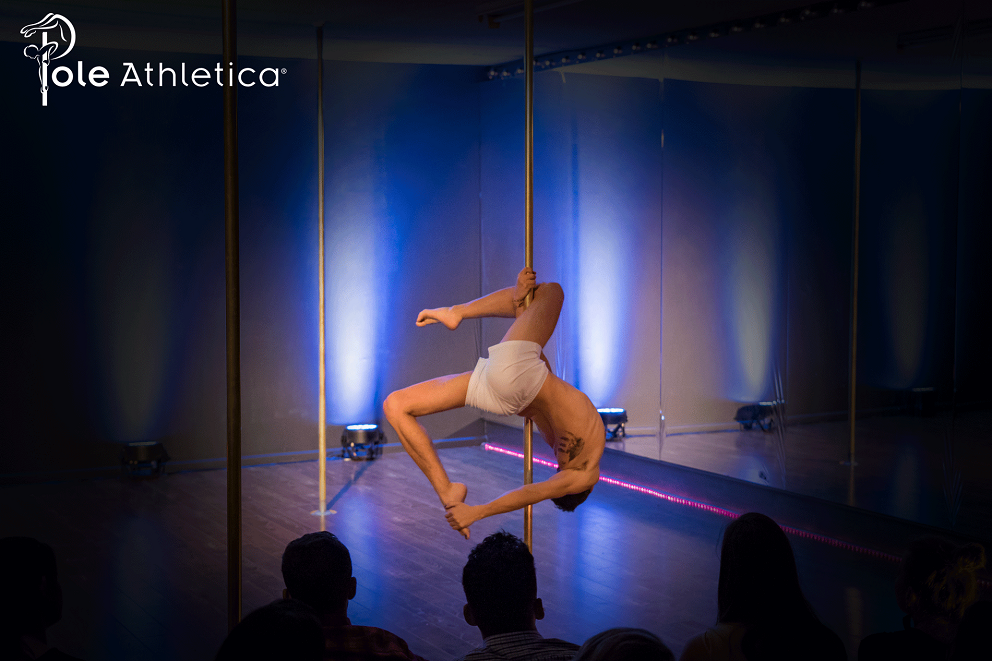 Did you make any changes to your training, diet or fitness regime leading up to the PoleFit Championships?

After each practice I made sure to drink a protein shake to help with muscle repair and growth. I'm a vegetarian, so I have to make sure I'm getting enough protein in my diet (tofu in everything!). Because I was practicing 5 days a week, my protein intake increased, and I tried to drink 2-3 litres of water a day (I'm usually pretty bad at keeping my fluids up, so I paid particular attention to this as well). Along with this, I treated myself to a couple of massages before the comp!

I also tried to go along to a few stretch, yoga, and dance classes. I'm not very flexible, nor am I a dancer. I enjoyed learning how to control and strengthen my body in different ways. It's still a work in progress, however I'm noticing a huge difference compared to when I started.

What kind of challenges did you face in your training leading up to the PoleFit Championships?

The biggest challenge was probably getting the flu and becoming bedridden for a week, three weeks out from the comp. This put a huge spanner in my routine prep timeline, however this also made me even more determined to give it my all when I was able to get back into the studio to practice.

Juggling work was fun as well - I was away for half the week leading up to the comp and flew back to Sydney on the Sunday morning of the comp. Knowing the work trip was coming up, I was able to pack in as much practice in the studio before I left.

What was the inspiration/motivation behind your routine?

I like putting together thought provoking routines, and this one was no different. I wanted to contrast masculinity with vulnerability and recreate the tension and pressure that's put on us to perform these gender roles in society.

How did you feel winning the PoleFit Championships in your division?

Incredibly surprised! I told myself at the start of March that I was going to enter the next studio showcase so I could gain some more experience performing in front of an audience and so I could push myself to improve my skills, flexibility, and endurance. When I found out the next studio event was a competition, I still maintained the same mindset - thinking of it as just another performance and gave it my all. To be announced the winner of the division blew me away. Do you see yourself competing or performing again in the future?

Absolutely. It's a great motivation to hone your skills and perfect moves. There is also nothing like the adrenaline rush of performing for a crowd. The next performance will be bigger, better, bolder.

What is your next goal for pole?

I want to keep working on my flexibility. It's not going to change overnight (I'm thinking of the ever illusive front splits), however I'm looking forward to working towards a gorgeous cocoon to put in my next routine. I'll be looking forward to future showcases, and gaining more experience performing in front of an audience.

What would you say to anyone thinking of competing in the next PoleFit Championships?

Just do it! Don't keep putting it off, you're ready now. You just have to be able to put in the time and effort. Work with what you have, and even when you don't feel confident, fake it until you make it. It's thrilling becoming immersed in the narrative you create, and you end up surprising yourself with what you can do. The team at Pole Athletica are incredible, and will always support you in any way they can.

Is there anything you'd like to say or add about the PoleFit Championships?

Thank you to everyone who worked to put on this event. The amount of work that goes into pulling it together is enormous. To our fantastic teachers, judges, performers, pole ninjas, our fabulous MC, the camera guy, and the audience who came to support us - a huge hug for all of you!