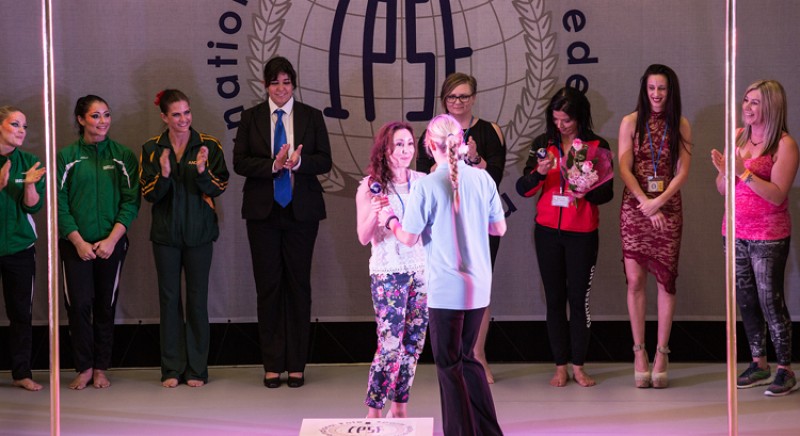 If you’ve ever wanted to learn pole dancing, Surry Hills is home to the 2015 best pole fitness studio.

The suspense hung heavy in London’s Crystal Palace National Sport Centre last week as the 10 nominees for the pole fitness industry awards gathered on stage for the decision. The ceremony followed a nail-biting, two day World Championship pole dancing competition that attracted 150 of the world’s most elite pole athletes from 28 countries, ranging from 10-64 years of age.

Organised by the International Pole Sports Federation, the championships were proceeded by an awards ceremony for athletes and leading industry businesses. Studio Verve , one of only two nominees from the Southern Hemisphere, collected the industry award for best pole sports studio. “It was such a surprise!” says Jennifer Grace, owner and director of Studio Verve . “To be recognised as one of the nominees out of just 10 from across the world was an incredible honour,” she says, “but to win the award? It’s a dream come true.” That dream began in 2004, when Jennifer founded and opened Studio Verve Dance Fitness as the very first pole fitness studio in Australia.  As a classically trained dancer with over 25 years of experience in performance, choreography and teaching, Jennifer pioneered her PoleFit program and debuted it to critical acclaim at Fitness First in 2005. She has since trained thousands of women from varying backgrounds and fitness levels to pole dance with the grace and finesse of a classically trained dancer. “I wanted to open my own studio to promote pole dancing as a form of fitness”, says Jennifer. “Back then, pole dancing was seen as something purely provocative. I wanted to help promote it as a whole body fitness system that combines dance, gymnastics and acrobatics” she says.

“I saw so many women struggling to find a form of fitness that they enjoyed, and that made them feel good and confident about themselves. I wanted to give them something I know works.”

Over the last 11 years, the vision Jennifer held for Studio Verve has become a reality for her team and the hundreds of students enrolled in her courses. The supportive family culture of the studio attracts and unites women and men of all ages, abilities and backgrounds. “I love how I don’t feel like I’m working out,” says Anara, who has been a student of the studio for several years. “It’s a hobby that makes me feel really good about myself, and it just happens to be great fitness.”

Many of the students found the studio after becoming disillusioned with repetitive gym routines that had little to no professional guidance. The team of professional instructors at the Studio complete extensive and rigorous training in order to promote the studio’s focus on technique and precision. Each class in her signature PoleFit series is designed to have a new challenge, which gives the students fitness goals and a reason for practicing each week. “It’s never boring,” says director Jennifer, “the classes are structured so that students aren’t doing the same thing each time they come in. With each challenge, they build confidence and use that momentum to achieve the next new move or combination, which they didn’t think they’d be able to do a few weeks before.” “It’s my home away from home,” says Jamie, one of the studio’s advanced male students. “The friends you meet here always make you have fun. You always end up leaving with a smile on your face, regardless of the day you’ve had.” The supportive and laid back culture of the studio is something that’s enjoyed by its students at every level of the course,“there’s no undercurrent of competitiveness that you find at other dance studios and gyms. We trust each other” says James, another male student. “I find that others in the studio always help me out if they think I need help or they feel I could improve on something. It’s a really unique vibe that I haven’t found anywhere else.”

We'd like to say thank you to everyone who voted for the studio and who has supported us in our journey so far. We continue striving to offer the best pole fitness courses and hope to continue spreading our love of fitness and the pole industry. We have many exciting events on the horizon, and we look forward to having you there with us as we continue to grow!