Double Time - The Art & Joy of Dancing with a Partner

Written by Ebony Pole Artist - Ebony is a professional writer and pole dancer from Sydney and can often be seen performing in pole shows like Encore, Elements and Miss Pole Dance NSW. Learn more about Ebony at her website www.ebonypoleartist.com

There's something about the synchronicity of dancing in doubles that takes the art of pole to a whole new level. It’s becoming so popular that some events will devote an entire evening just to double shows, like the recent Doubles Vision Championships hosted earlier this year by Bobbi's Pole Studio in Sydney.

Doubles workshops are also being offered more regularly by pole studios, and with it comes an exciting, but important decision: who will I pick as my doubles partner? We spoke to five very different double acts on finding their pole soul-mate and the rewards of training and performing as doubles.

Q: How would you describe your pole double act?
Lisette: We both are in love with strength and dynamic moves. We love combinations of dubstep, drums and epic music that make us create exciting routines.

Q: How did you meet and what made you decide to team up?
Terri: I initially met Lisette at Gay Pride, where I was performing pole and she was performing choreography. We agreed to skill share and start training together. I taught her pole, she taught me acro balance and we found that we made a great team!

Q: What have been some of the highlights from performing as a double act?
Lisette: Winning three world championship titles is probably our highlight as doubles. We never expected that to happen to us.

Q: What are some of the challenges in training and performing as a double act?
Terri: We find it difficult to actually have TIME to train! We are both so busy with our own studios and travelling that it means we don't get to meet up as often as we would like to improve on our skills and come up with new creative tricks. We wish there were more than 24 hours in a day!

Q: What tips can you share for pole students who are thinking about training / performing with a doubles partner?
Lisette: Do it! It's a different type of training compared with solo training and you can create loads of different tricks. And NEVER EVER DROP YOUR PARTNER! It has happened before but even if it hurts you hold on! 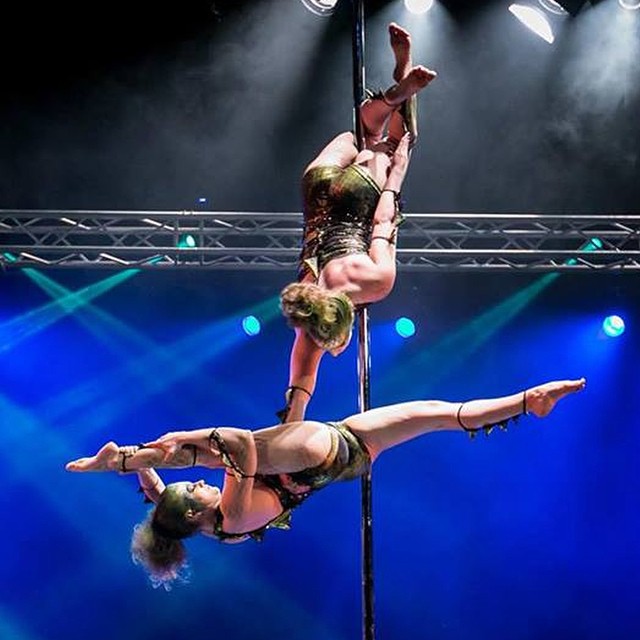 Tiffany Downes and Ruth Mansfield are from Queensland, Australia. They are affiliated with both The Pole Gym and Pole Fitness Australia and represent themselves as Enchanted Pole Performance.

Q: How would you describe your pole double act?
Enchanted: From the outset we've aimed for story telling and theatre over every other style as we felt this was the best way for us to perform and suited our individual talents. We decided to use the performing name 'Enchanted' because it reflected our style and incorporated the idea of storytelling, fairytales and animated characters. Every routine we do has a story or a meaning, sometimes this is apparent to the audience, sometimes it just has meaning to us.

Q: How did you meet and what made you decide to team up?
Enchanted: Nothing we did at first ever intended to lead us to what we are doing today. Tiff was managing the studio she taught at and I was a student there at the time. We didn’t know each other very well but Tiff asked me one day if I wanted to ‘jam’ doing doubles, as neither of us had ever done anything like that before and doubles was still a relatively new thing for the pole industry. So we ‘jammed’ and found ourselves really enjoying exploring the possibilities for doubles. We made up a routine to perform at the ‘in house’ studio performance night. Everyone really liked it and someone said we should compete. So we entered a semi-pro comp in Sydney. We won that comp, so we entered a national comp, and to our surprise we won that one too and it just went from there.

Q: What have been some of the highlights from performing as a double act?
Enchanted: Sharing the successes with your best friend, being able to travel and teach our passion all over Australia and even overseas. Exploring and creating in a division that had plenty of room to grow, and still has. For us, we gained a friendship that would never have happened otherwise.

Q: What are some of the challenges in training and performing as a double act?
Enchanted: The biggest challenge for us is having different schedules and trying to find the time to train together. Also being in the same frame of mind when we do get together for training. One person may be motivated one day, and the other won’t be as enthusiastic, and this changes all the time. Also agreeing on ideas and having to compromise.

Q: What tips can you share for pole students who are thinking about training / performing with a doubles partner?
Enchanted: Don’t partner up with someone because they are amazing at pole. Find a partner that you know you can get along with. You can always help someone improve their skills in pole, but you will never be able to change who they are.  The longer you work together and the more stressful the competitions become, the more important it is that you get along. 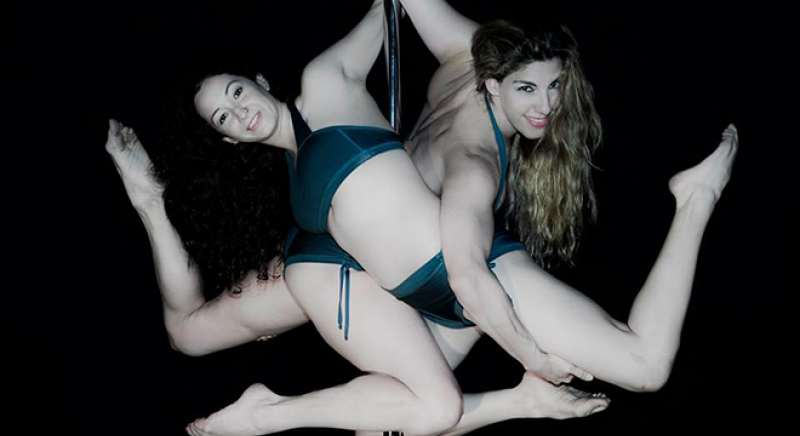 Sarah and Verónica both represent Saracademy in Brussles, Beligum. Verónica is originally from Mexico.

Q: How would you describe your pole double act?
Verónica: As doubles we always try to use the pole as a tool for artistic creation. Most of the time we try to say things through pole or “understand” the pole while searching for new ways of engaging with it. I think all of the skills developed while practicing are a personal adventure and will resound beyond what we can see on stage. We work hard to put together a little bit of our own whisper that suggests something to the audience.

Sarah: Our acts are based on connection, flow and theater, less on tricks. We have a special creative process where we let go our craziest ideas, moves, interpretations and then keep what makes sense for the chosen concept. We try to use the pole as an element of dramaturgy and choose precisely the pole moves that can best interpret our ideas. We love to innovate and bring strong feelings to the audience and a different vision of pole dance.

Q: How did you meet and what made you decide to team up?
Sarah: We met in 2012 when Verónica joined the Sarahcademy team of teachers.

Verónica: Sarah invited me to train together at an interview. I remember she opened the door and looking at her shoulders I thought “Wow, this is a strong girl!”

Sarah:  In December 2013, just before Verónica had to return to her home country Mexico, we improvised a flow dance and this led to a very nice osmosis and a great understanding of each other. There was such a connection! It left such a big impact on us, that when Verónica came back to Belgium in May 2014, we decided to team up to create a choreography in three weeks and to participate in the Benelux Double Pole Dance championship where we got second place. Since then, we chose the name “Le Fil Mauve” for our artistic company in the dance, theater and circus world.

Verónica: We decided to team up after we saw our compatibility for working together while we were training and experimenting. Each one has very different qualities and specialties, so we try to work in “collective creation” where we both have to propose and follow to get to places we wouldn't arrive at by ourselves.

Q: What have been some of the highlights from performing as a double act?
Sarah: The biggest for me is our creation called “Zapping Box”. We had this crazy idea to build a one-hour duo pole show! We worked hard during 4-5 months to create this piece that we performed during the Pole Fusion Festival in November 2014. We collaborated with a composer that customized music to our concept. We mixed different performing arts such as contemporary dance, acroyoga, theater and pole dance while expressing a kind of critical view on society using a big dose of humor. On stage, I had really the time of my life! Being on stage with a partner, dancing and responding to each other was so intense. The pleasure is twice bigger when shared! I felt like crying with happiness and love at the end when I saw all the people giving a standing ovation in front of us! And we had so much great feedback from other pole stars. We succeeded our challenge!  Our dream is to be able to play it again in other theaters and countries.

Another highlight is our win at Pole Theatre UK 2015. Our slow motion Kung Fu fight had an unexpected big success. Hearing people laughing so much gave us incredible energy and good feelings! We are so thankful that the jury rewarded the comedy style in pole dance.